Enough to drive you crazy if you let it

One incessant refrain in the weeks since the election has been how Democrats – and Hillary Clinton in particular – failed to reach out to “working people” and secure their votes.[1]This presumes that policy positions were the subject of media coverage in this election season, which they were not. This claim is dubious, but the narrative resonates because of specific, historic ideas we have about who is a worker. Even if we take “working people” to mean people who earn less money, Clinton won those who made less than $50,000 a year. Clearly “working people” is coded white, for white Americans, for politicians, and for the media. To understand white bodies as the laboring bodies that matter in America is unsurprising, given the continued refusal by many to recognize that our economic system was built on enslaved labor. Thankfully, some columnists and activists and many historians have tried to push back against the conflation of the white working class with the working class in general, though to little avail.[2]This alone is reason enough for me to find these political and academic calls to drop “identity politics” ridiculous, and rather offensive to boot. There has been a lot of analysis of the way that racial views and nationalism shaped how people voted, even as the drumbeat of “it’s just economic anxiety!” continues. I don’t think that’s the whole story, though. 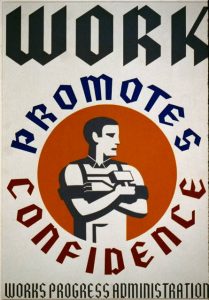 There seems to be another angle that suggests itself, listening to the constant talk about how HRC couldn’t connect with working people. On paper, it seems strange. The Democratic platform was certainly pro-worker, and Clinton and her husband are far better examples than Trump of the social mobility through hard work and education at the center of the American Dream. And I don’t think we can explain it away by the fact that she became a member of the elite by working in an elite profession; both her husband and Obama did the same, but when Obama rolls up his sleeves and says “workin’ people,” lots of people buy it – or at least bought it when he campaigned, which is what counts for the purposes of this examination.

Still, Hillary Clinton talked about jobs a lot. But Hillary Clinton doesn’t look like what we imagine the American worker to look like, and she talks about American workers who don’t look like what we imagine either. I think this played a much bigger role than anyone is willing to recognize. There is a pair of ideas about women and work that dominate the narrative in America, that women’s domestic labor isn’t real work, and that women only started working outside the home “recently.” Clinton and the Democratic platform pushed back against both, but they’re incredibly hard to crack.

I know they’re hard to crack because women’s labor – productive and reproductive – is at the center of many of my classes, and my students are very resistant to recognizing it. The idea that women only recently began working for money outside the home is incorrect – and quite obviously incorrect if you think about it for more than 5 seconds – but that doesn’t seem to matter much. If you need examples of women’s paid, skilled labor stretching back centuries, scroll down to the bottom.* The important thing to be aware of, though, is how much and in what ways women’s paid labor – and therefore a woman who labored for pay – has been seen as “less than,” “unnecessary,” and degrading to men and their labor. Of course, this was often reframed as paid labor itself being degrading to women – so let’s let them be ladies, amirite?[3]Let me be clear – I’m not saying women themselves don’t buy this argument. They do, and the ways that they do have been examined by lots of historians looking at how race, class, … Continue reading

The issue of women’s domestic labor being a valuable economic contribution is also a difficult one for people to wrap their heads around, given our contemporary understanding that work is a thing you do for wages. I often fall back on the line: “If you’d have to pay someone else to do it for you, it’s work.” It’s why it’s so hard for students to see the economic drawbacks in the shift to wage labor for women, particularly for black women in domestic service, whose skills in the domestic arts were simultaneously impugned and sought out. I always have to prompt students to think about what those wages have to pay for – childcare, in particular – and what is left to do when one gets home. Eight hours for work, eight hours for rest, eight hours for that other work that society frames as duty rather than labor!

Since women’s labor, in and out of the home, still remains excluded from political discussions, for the most part, it’s actually important that we stop and recognize this year’s campaign for who they talked about when they talked about workers.[4]Lean In does not count. Let’s be real here. Instead of talking about nostalgia for the white, male, industrial laborer who dominates the narrative (if not ever the actual economy), Clinton talked a lot about people in service work, which dominates our economy, but is often excluded from the narrative. The policies she advocated – paid family leave, affordable childcare – would help men and women alike, in all sectors and fields.

Because women have continued to do most of the housework even as they’ve increasingly shouldered the burden of bringing home the bacon, these policies read as “women’s issues” rather than “economic issues.” These policies could only be read that way because we have yet to reckon with women’s labor, paid and unpaid. That they came from a candidate who was vilified for taking pride in her paid labor and scorned for rejecting the kind of domesticity demanded of her as First Lady seems sadly appropriate.[5]Over the summer, in a column written in support of her, Nick Kristof still singled her out for wanting to make money, a characteristic he saw as “unseemly.” No, I can’t give you the … Continue reading

For all Clinton reminded us that women’s rights were human rights, it seems clear that we’ve yet to recognize that women’s rights are labor rights too. If we as a culture saw women’s work as economically valuable, equal to the labor done by the men on WPA posters, when a woman talked about affordable childcare policies, she could be seen and understood as a worker advocating for workers, not just a woman talking about “niche” issues. I don’t think it was Clinton’s money or her lack of work experience in heavy manufacturing that prevented her economic policies from “exciting the base.” I think it was that she didn’t “look like a worker,” and that she dared to promote policies that dignified women’s paid and unpaid labor.[6]What about Elizabeth Warren, I hear you saying. First, I think if she ran for president on these policies, she’d face a similar backlash. She hasn’t made a name fighting for affordable … Continue reading

So many election post-mortems have told us that “working people” just saw Donald Trump as more authentic and in touch with the values of workers, and that the people who rejected Hillary would have voted for Joe Biden or Bernie Sanders or some other mythical candidate who always looks pretty much the same, funnily enough. If we’re going to buy that argument, let’s at least be honest with ourselves about what we’re saying.

*In the earliest weeks of U.S. women’s history, we read about women who ran inns and pubs, women who were midwives (who were working to bring home the bacon even when their husbands ended up in debtors’ prison!), women working as paid servants, and women who were being held in bondage, valued for their productive and reproductive capabilities. We see women being paid a pittance to work in textile mills, watching one of their major economic contributions – cloth production – be industrialized and their work “deskilled” in the course of a generation, even as they are explicitly sought out by employers for their expertise. We see these same women taking to the streets for decent wages. We see women working as teachers and tutors, taking in laundry and boarders, and working in munitions factories in the Civil War. Sweatshop labor on the Lower East Side, prostitution, the Triangle Shirtwaist fire, Rosie the Riveter, flight attendants, pink collar workers, Norma Rae, 9 to 5, and the constant, hidden force of domestic labor. The litany is endless.