The “rediscovery” of Frederick Douglass recently made me remember a letter I found in my research, from one young Sedgwick woman to her cousin. The letter is undated and no one in it is named, and it wasn’t really vital to my research so I never bothered to figure out precisely who it was talking about. Still, I know the letter writer’s life well enough to guess that this was written in Lenox, MA, in the mid-1840s, and I have always assumed the former slave mentioned in it was Douglass.[1]Given Douglass’ speaking schedule, I suspect this is just before his May 9, 1843 speaking date in New York, but I have no way of knowing. The author, Bessie Sedgwick, would have been about 17 when she wrote this letter, which is in the Sedgwick Family Papers at the Massachusetts Historical Society.

Who do you think I had here to breakfast the other day? Two abolitionists who wish to keep the matter of slavery “agitating before the people” The one a ranting screaming pertinacious unamiable individual saying only what has been said a hundred times before but in a manner a hundred times as disagreeable as it ever was said before – The other, a nice little gentlemanly person, who had the sense not to say much in public. The third guest was a black slave who escaped from the South some time ago, and is one of the most quick witted and one of the most eloquent people I ever saw – He speaks with all the bitterness you would expect from one who had suffered under the wrongs of slavery – is very satirical and has a great deal of dramatic power – so to speak – uses perfectly good language – and is altogether well worth hearing. He is to be in New York on Tuesday evg and if you happened to hear him I am sure you would be very much interested by him…

Perhaps someone who knows more of the personalities of the abolitionists could identify this with more certainty.

The cowardice of “no strong convictions”

Many of us in Connecticut were horrified – but not surprised – at video of a post-election gathering at which someone in Klan robes rode around a bonfire waving a Trump/Pence sign while onlookers laughed and cheered. Some, however, including the first selectman, downplayed the seriousness of this.

A town leader downplayed the vile bash. “I think it was just some young people who made a big mistake trying to get attention,” East Windsor First Selectman Bob Maynard said. “I suspect they have no strong convictions and no really racial overtones — I think they were just enjoying the moment. That’s what I suspect, but we’ll have to see what they have to say.”

Now, one reason he might do this is because to him, this sentiment isn’t that weird. And anyone from Connecticut who has an honest bone in their body would certainly agree this isn’t surprising. Many of my high school classmates proudly wore Confederate flag belt buckles; we knew school was out every day when one classmate drove out of the parking lot and blew his horn, which played “Dixie.” I had no understanding of what any of it meant, because like many rural white Americans, I knew almost no black people and my education largely failed to impress upon me anything meaningful about the painful racial history of the country, and of my own state. East Windsor police were quick to point out that this wasn’t part of a Klan rally, it wasn’t “planned,” but that shouldn’t make anyone feel better. It should instead remind us of how readily available these symbols and behaviors are. Should we feel more comfortable with the fact that someone just happened to have these robes at hand for an election celebration? Or that someone thought “Before I go out, let me get some bedsheets and whip out my Singer sewing machine.”

Town leaders claim this is someone with no strong convictions. I would reframe that analysis a little. They’re certainly a coward, but they have convictions, and we need to be honest about that. If we aren’t, we’re even worse cowards.

People lied to pollsters for months because we taught them that their hateful opinions are shameful but not why they are wrong.

The other thing that seems particularly important in understanding this incident is the history of the Klan in America. Most Americans think of the Klan as an anti-black organization in the years following the Civil War. That was the first iteration, but it was not the only one. The rise of the second Klan in the 1920s was built on anti-black, anti-Jewish, anti-Catholic, anti-immigrant, and anti-feminist sentiment. That Klan found support in the industrial North, and it found political legitimacy. Many people in Connecticut now hold views or belong to groups who would have been seen by the Second Klan as un-American. 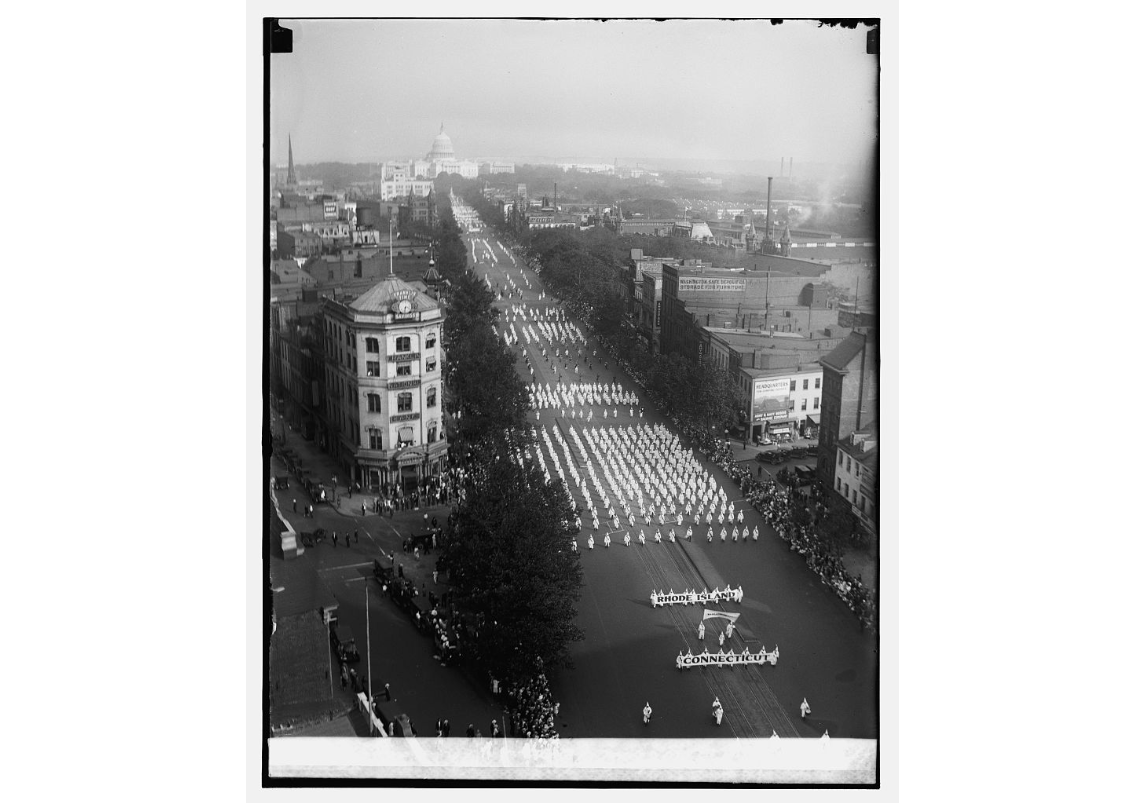 Klan march in Washington, D.C., 1926. Photo taken from the archives of the Library of Congress.

If you are interested in learning more about this, a great place to start is with the writings of Kelly Baker. You can read an interview with her about her book Gospel According to the Klan here.

But I also offer you this, something that my students in US II read. This is Imperial Wizard Hiram Evans, writing in the North American Review in 1926, in a piece called “The Klan’s Fight for Americanism.” Take some time and look at the language used here. We don’t have to see organized Klan rallies to know that the fear and anger that impelled the Klan are still an important part of social discourse today. (ETA: This great post by Graham Stinnett at the UConn archives about the Klan in CT in the 1980s.)

The Klan, therefore, has now come to speak for the great mass of Americans of the old pioneer stock.  We believe that it does fairly and faithfully represent them, and our proof lies in their support.  To understand the Klan, then, it is necessary to understand the character and present mind of the mass of old-stock Americans.  The mass, it must be remembered, as distinguished from the intellectually mongrelized “liberals.”

These are, in the first place, a blend of various peoples of the so-called Nordic race, the race which, with all its faults, has given the world almost the whole of modern civilization.  The Klan does not try to represent any people but these.

There is no need to recount the virtues of the American pioneers; but it is too often forgotten that in the pioneer period a selective process of intense of rigor went on.  From the first only hardy, adventurous and strong men and women dared the pioneer dangers; from among these all but the best died swiftly, so that the new Nordic blend which became the American race was bred up to a point probably the highest in history.  This remarkable race character, along with the new-won continent and the new-created  nation, made the inheritance of the old-stock Americans the richest ever given to a generation of men.

In spite of it, however, these Nordic Americans for the last generation have found themselves increasingly uncomfortable, and finally deeply distressed.  There appeared first confusion in thought and opinion, a groping and hesitancy about national affairs and private life alike, in sharp contrast to the clear, straightforward purposes of our earlier years.  There was futility in religion, too, which was in many ways even more distressing.  Presently we began to find that we were dealing with strange ideas; policies that always sounded well, but somehow always made us still more uncomfortable.

Finally came the moral breakdown that has been going on for two decades.  One by one all our traditional moral standards went by the boards, or were so disregarded that they ceased to be binding.  The sacredness of our Sabbath, of our homes, of chastity, and finally even of our right to teach our own children in our own schools fundamental facts and truths were torn away from us.  Those who maintained the old standards did so only in the face of constant ridicule.

Along with this went economic distress.  The assurance for the future of our children dwindled.  We found our great cities and the control of much of our industry and commerce taken over by strangers, who stacked the cards of success and prosperity against us.  Shortly they came to dominate our government.  The bloc system by which this was done is now familiar to all.  Every kind of inhabitant except  the Americans gathered in groups which operated as units in politics, under orders of corrupt, self-seeking and un-American leaders, who both by purchase and threat enforced their demands on politicians.  Thus it came about that the interests of Americans were always the last to be considered by either national or city governments, and that the native Americans were constantly discriminated against, in business, in legislation and in administrative government.

What seems most important here is not what a particular iteration of the Klan stood for, but the ways in which it has expressed the fear and hatred of dominant groups who feel threatened by social change. In that sense, it should not be surprising to anyone that someone might put on the white robes in this moment. If the Klan is, and has been, a way for “real Americans” to assert their dominance, this incident in East Windsor shouldn’t surprise anyone. Sadly, the weaksauce condemnation and shock of town leaders and people around Connecticut isn’t surprising either.

No one’s shocked at what happened in East Windsor. But lots of people don’t care because to care would mean self-examination. And the willingness of so many to avoid self-examination is something to be ashamed of.